Skip to content
Home/awards, ENYSRA/Young Referee of the Year – Seth Kehr
Previous Next 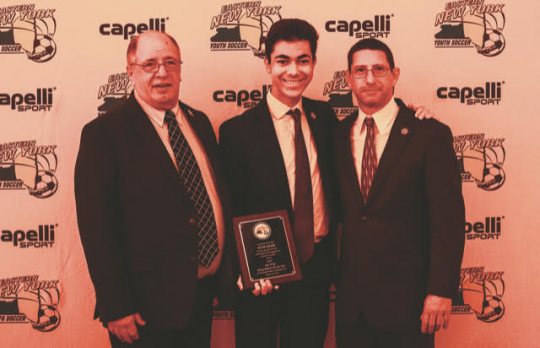 December 19, 2019-The Eastern New York Youth Soccer Association (ENYYSA) is very pleased to announce that Seth Kehr of Red Hook in the Hudson Valley has been honored as our Young Referee of the Year. Seth was selected by State Youth Referee Administrator Lee Suckle and received the Ray Wolfe Young Referee of the Year Award at the Eastern New York Holiday Party on December 7 at Marina del Rey in the Bronx.

Seth started playing soccer as a Boys-Under-5 player in Red Hook’s intramural program and climbed the ranks as both a goalkeeper and defender in intramural, travel team and school teams. He started refereeing Red Hook’s intramaural soccer games when he was just 11 years old and officiating quickly became very important to him. He progessed to refereeing travel team games in the East Hudson Youth Soccer League (EHYSL) and was so good that he has officiated State Cup championship games and became one of the youngest to officiate Development Academy games, at the age of 13.

He was one of the youngest to ever attend Hudson Valley Soccer Referee Association (HVSRA) meetings plus he was invited to and regularly attends MLS referee Robert Sibiga’s elite referee group meetings in Mahopac to review game clips and analyze game situations.

Seth’s now comprehensive experiences as a referee has imparted a sense of importance of working with a team, respecting the views of others and a willingness to consider all situations and perspectives regarding a matter before coming to a conclusion.
Outside of refereeing, Seth was aware that there were not many local opportunities for children with intellectual, emotional and/or physical challenges to participate in soccer. After much independent research and his presentation to the Red Hook Soccer Club Board of Directors, he was able to implement a TOPSoccer program in Red Hook.

Seth has also partnered with a Hudson Valley non-profit, Kickin’ Back, to have tournament participants bring used soccer equipment in order to donate to children internationally. He believes that soccer can be used in a humanitarian way to benefit those less fortunate.

With approximately 100,000 youth soccer players––both boys and girls––and more than 25,000 volunteers, the non-profit Eastern New York Youth Soccer Association (ENYYSA) stretches from Montauk Point, Long Island to the Canadian border. Members are affiliated with 11 leagues throughout the association, which covers the entire state of New York east of Route 81. ENYYSA exists to promote and enhance the game of soccer for children and teenagers between the ages of 5 and 19 years old, and to encourage the healthy development of youth players, coaches, referees and administrators. All levels of soccer are offered––from intramural, travel team and premier players as well as Children With Special Needs. No child who wants to play soccer is turned away. ENYYSA is a proud member of the United States Soccer Federation and United States Youth Soccer Association.